There’s been a lot of discussion of public transit and urbanism in Atlanta recently. I wanted to touch on some observations I’ve made recently about public space.

We recently moved the Time Out Labs office from Midtown to Downtown in the new Switchyards Downtown Club, which is awesome. Kudos to Mike Tavani and Dave Payne for having the vision to put together something startup-oriented and consumer-oriented in Atlanta. It feels a lot like our Hugecity halcyon days at the Goat Farm but with climate control. I’m sure great things will come out of having so many people trying to do such big things in one space.

Being in Downtown Atlanta has been great. As someone who has lived in metro Atlanta his entire life and intown Atlanta his entire adult life I have to admit that I have not given downtown much thought. In my mind it has always been the place where the suburbanite office-dwellers shuffle in for a 9-5 and then flee from the encroaching darkness leaving a vacuum which sucks in the unsavories. And Georgia State. I’m finding that some of the most interesting things in the city are happening downtown, though.

Why wouldn’t they be happening downtown? It’s the densest part of the city in terms of utilizable space. It has multiple MARTA stops. It has the streetcar, which really should be thought of as the first leg of an intown transit network (think BART & Muni in San Francisco) rather than a standalone boondoggle. It has fantastic old buildings. It’s a grid… if you cross your eyes and rotate your left eye 45 degrees. I love the weird back alleys and dives of Fairlie-Poplar. It’s even got the gawking slow walkers taking up the entire sidewalk that you want to push out of the way. It’s almost like being in a real city.

Unfortunately, being in downtown has crystalized the history of what’s held Atlanta back from being a real city:

Atlanta has an unfortunate history of open hostility towards public space.

An actual street in downtown Atlanta. At least it has sidewalks...

This is the opposite of a public space. This space screams with every fiber of it’s being “Get out of here!” This street does have sidewalks, but they’re so uninviting and unsafe feeling I’d walk blocks out of the way to avoid them. The buildings on either side of the street seem fortified against the street. Almost as if a structure could have disdain.

This is an unfortunate legacy from the architecture and urban planning thinking of the 60s-90s. As the suburbs exploded in popularity, downtown remained where the jobs were. The people who successfully created little insular spaces for themselves in Roswell wanted to stay ‘protected’ when commuting into Atlanta. We obliterated lovely historic neighborhoods to accommodate the desire to be fortified in a vehicle while driving to a job. We designed office buildings that barricaded themselves against what was surely irreversible urban decay.

The line of thinking was that urbanness was an unfortunate holdover of days when lack of car and computer forced people to live in close proximity to each other. Indeed people were waiting for the day that they wouldn’t even have to spend any time in a city at all because of the promise of telecommuting. Everybody could live the 50s dream of a suburban house with a neighbor on each side and a shiny new car in the driveway.

And so acres of well-built urban public space in Atlanta were torn down to fortify against the legacy of urbanness. Instead of the public-facing buildings we once had, we have inward-facing buildings like the Americasmart, Westin, and the Marriott Marquis. 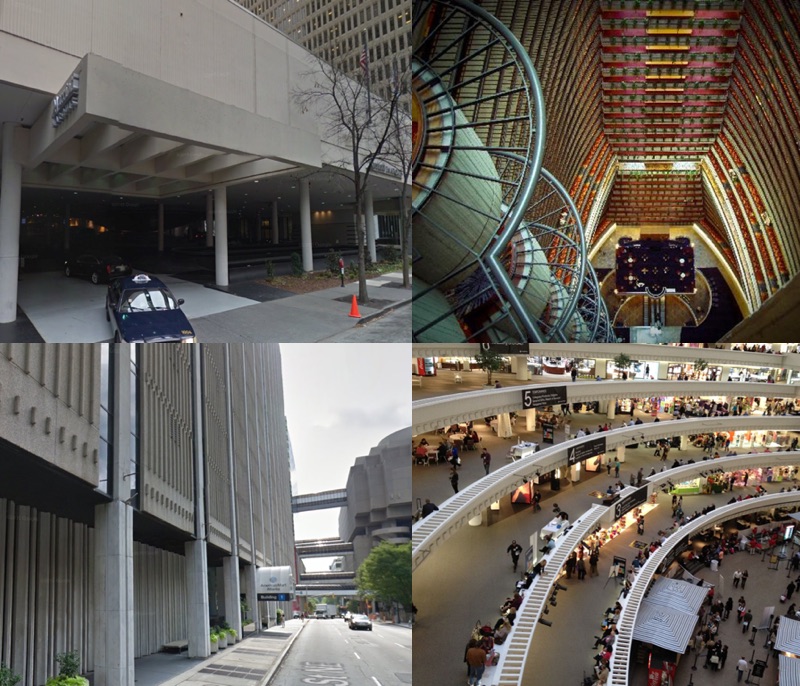 It’s almost as if the buildings expect their inhabitants to barely tolerate holding their noses against the stink of being in the city until they can reach the fortified public spaces they hide inside themselves. They acknowledge the importance of public space while trying to make it as private as possible.

This is the legacy that we have to fight against in making downtown a space that people want to spend time in again. Most of the structures are not going anywhere. All we can do is make sure we don’t make these same mistakes in the public spaces we are creating now. We’re not doing a fantastic job. Somebody let Emory build this in Midtown: 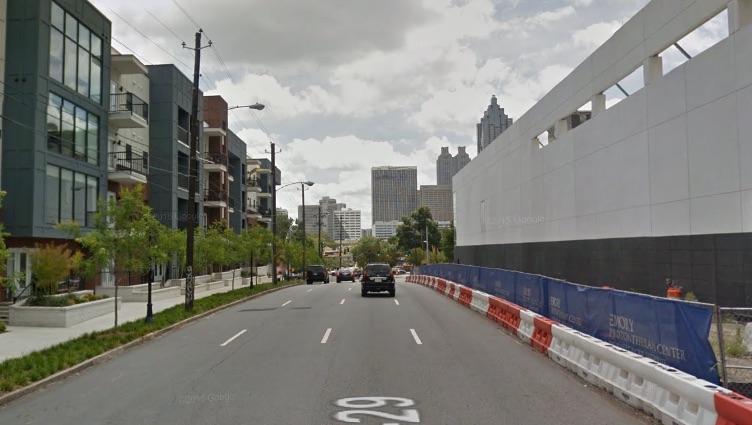 Even today we’re seeing naked hostility towards the public space in Atlanta. Not only did someone think that this was an appropriate building facade to put on Juniper Street, the sidewalk is still closed today.